Our Ministers and Staff 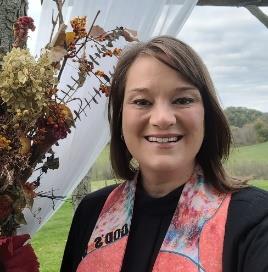 Rev. Holly MillerShank has served the United Church of Christ in multiple capacities: as a settled local church pastor in Pennsylvania, an interim minister in Ohio, as the interim Associate Conference Minister in the Southern New England Conference and for over a decade as the Minister and Team Leader of the MESA Team in the UCC National Offices. Holly was called to serve as the settled Senior Minister of our congregation in 2022.
Holly brings a deep passion for ministry, including both domestic and international contexts. She has served with Global Ministries in India and Korea as well as completing academic studies in Nicaragua, El Salvador, Guatemala, Costa Rica and South Africa.
Holly and her husband Jonathan are both from Central Pennsylvania, together they have one daughter and two pet tortoises.
Her worship style is inviting and engaging, bringing creativity to God’s word and encouragement to make our faith relevant for today’s context. Pastor Holly is also available for pastoral support and is looking forward to getting to know Shrewsbury and the surrounding community.

Curtis Smith began studying piano at a young age. His interest in the pipe organ began as an undergraduate piano major at Stetson University in DeLand, Florida. Since then he has played many pipe organs of varying sizes and shapes, each with their own sound and personality. Curtis is enjoying getting to know the Casavant organ at First Congregational Church of Shrewsbury with its wonderfully prominent bass and sonorous overtones. Curtis received his Master’s of Music degree in piano performance from West Chester University of Pennsylvania. He received his vocal training at the Pädagogische Hochschule in Freiburg, Germany and at the International Kodály Institute in Kecskemét, Hungary. As a certified teacher of the Alexander Technique, Curtis also enjoys teaching people about sensory motor integration. Curtis serves on the program committee for the Worcester chapter of the American Guild of Organists and teaches piano at Pakachoag Music School of Greater Worcester. When he’s not playing the organ, piano or harpsichord, Curtis enjoys canoeing, sailing and cycling.

With a French law degree from the University of Paris (Nanterre) and a French MBA from ESVE (L’Ecole Supérieure de Vente et d’Exportation de Paris), Sabina Terrades moved to the USA in 1994 and had a successful corporate career in technology marketing upper management until her children were born and she became a full time Mom. Sabina is a Licensed Local Pastor of the United Methodist Church. She currently serves a small parish, First United Methodist Church, in Southbridge, Mass. Sabina knows Shrewsbury very well having lived here for several years. She and her husband and two teenage children currently live in Worcester.

Paul Adkins served as senior minister for 27 years before retiring from the church in 2010. During his time with us, Rev. Adkins supported the work of the Ecumenical Clergy Group in Shrewsbury. He was very involved in the Massachusetts Conference of the United Church of Christ. In addition, he was also an adjunct faculty member at Andover Newton Theological School.